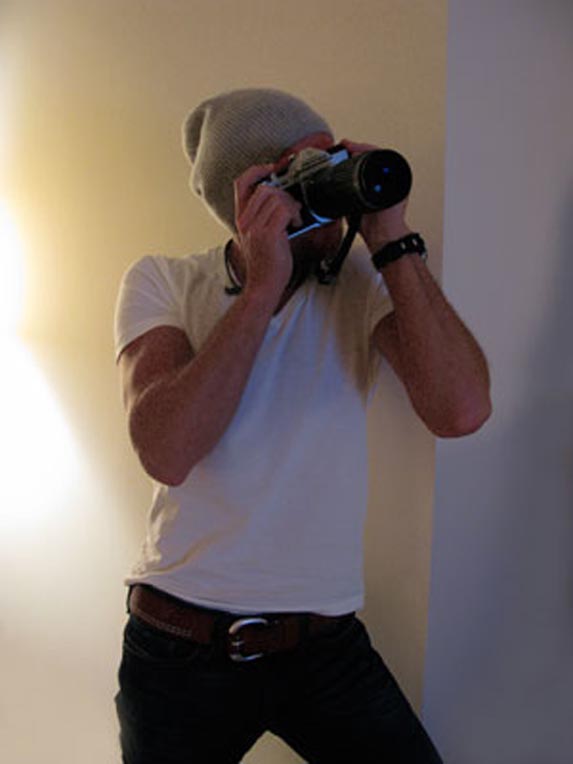 For 5 years, the work of the French artist Pascal Blondeau established in New York, has been devoted to Identity and the different conditions that come with him. The Double "I" who exists in all of us is fascinating him more and more, looking for an aesthetic and a beauty beyond perfection which makes losing the human being in a quest for an Absolute that he may reach ever; loneliness not assumed that weakens and isolates against a world rich but violent, seeking through A Peace and Happiness, means too chaotic, leading to a form of madness ... as well as that aspect “Ugly-Beautiful’’ appearance, Soft-Hard Angel-Demon, Hot-Cold. For him, the human being is a beautiful monster invader, seducer, devastating, love and hate at once; his work is inspired on these scary aspects which are such passionate subjects.

He takes a lot of photo-portraits of real people and portraits display mannequins, and mixes thoroughly to obtain a mixture of true-false human being.
In July 2009, the series Deneuve and Lady Swing were performed in Bangkok, where he had an exhibit at the Museum of Contemporary Art, he was the cultural season French Artist invited by the French Embassy.

This series was a long process of transformation of the actor-artist Michael Shaowanashai, the exposition was a huge success.He also had some exhibitions at the Museum of Contemporary Art in Skopje (Macedonia), at the Museum of Modern Art Prishtina (Kosovo) and at the center’s art contemporary Thessaloniki (Greece), he was also selected in 2008 by the city of Lyon for the Event '’Lyon September of Photography" at the Caroline Vachet gallery.
Whereas the exhibition of his installation '9/11 OH MY GOD ' at The Invisible Dog in Brooklyn with ULTRA VIOLET, French cultural services in New York are presenting, on the initiative of Antonin Baudry, Cultural Counselor of the French Embassy, his photographic work, the series of PORTRAITS.

In 2012, his work will be the subject of an exhibition at the Museum of Modern Art of Copenhague organized by the Embassy of France in Denmark, under the high patronage of Veronique Bujon Barre, Ambassador of France in Denmark. Then some exhibitions are planned in Paris and Houston (Texas) under the double exposure of Contemporary Art organized by UNESCO.
He lives and works in New York.